Envisioning the future of jobs in a world where technological progress seems to produce countless examples of invention and ingenuity is an exciting prospect for some. In our endless strive to make work more efficient and reduce costs, humanity has adopted a number of technologies into the workplace, such as automation, artificial intelligence (AI) and advanced robotics. But, as with any technological progress seen throughout history, concerns over the fate of humans and whether their roles will be replaced by technology continue to exist. COVID-19 has seen a boost in digitisation and an acceleration of new technology being adopted in the workplace, serving only to exacerbate these fears as many wonder whether their role will be fully replaceable in the coming years. The reality is that the situation is far more nuanced – whilst technology will eliminate the need for people in certain roles, it will also create a number of new jobs that need to be filled by humans.

This is why we at Faethm AI have collaborated with Boston Consulting Group (BCG) on a study, The Future of Jobs in the Era of AI, that presents the potential impact of emerging technologies on jobs in three countries: the US, Germany, and Australia. By analysing the underlying demographics in each country, we have been able to develop detailed scenarios that model the effects of new technology, as well as consider how the pandemic has impacted GDP growth. The study has produced some key insights into the future of jobs in these three countries. Whilst the situation varies for each, similar problems of skills shortages and structural unemployment, as well as a need for action from governments and business leaders, is apparent. 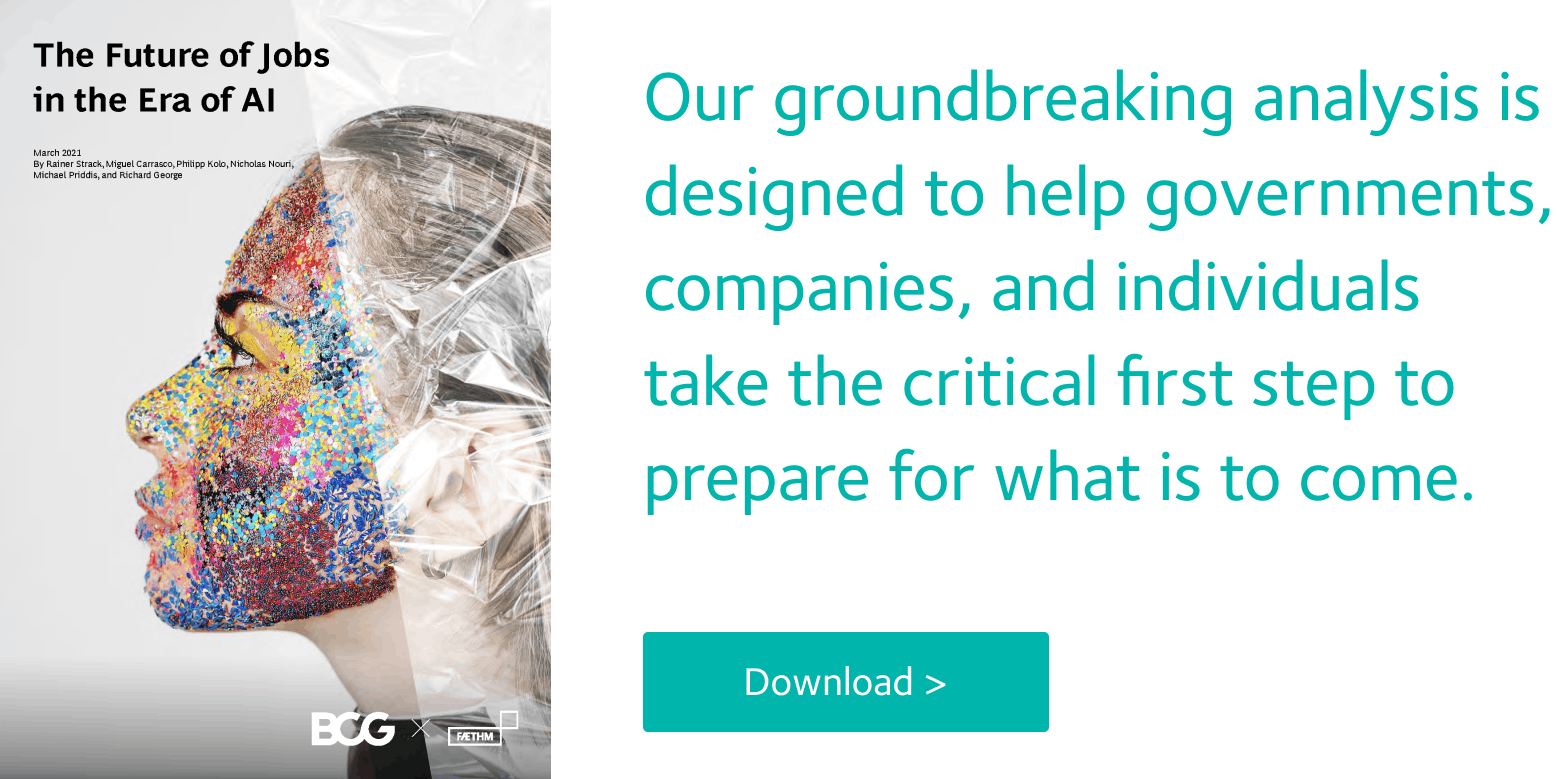 Humanity has always thrived when work centres around problem-solving, cognitive thinking, strategic planning, and other tasks that require quintessentially human attributes to complete to a high standard. The area where we struggle is in the repetitive – those tasks that require manual handling of infinitely recurring actions are hindered by human error and tedium. It is in these tasks where computers have the upper hand, as the ability to process data repetitively at lightning speed without the delays of boredom or error means technology is far more suited to the task. This is a pivotal reason behind why workers in office and administrative jobs are at high risk of being replaced by technology – in fact, 3 million US workers in office and administrative jobs could be seeking work by 2030.

Although new technologies will eliminate some occupations, there are many areas where they will improve the quality of work that people do by allowing us to focus on more strategic, value-creating, and personally rewarding tasks – in other words, human work.

Whilst the three nations studied share similar projected outcomes, the data shows that the effects felt in specific areas will vary for each. In terms of projected labour shortfalls, the numbers look similar for all three nations – the US will likely experience the most shortfall, with a range of 0.9% and 4.9% expected by 2030. Australia’s workforce supply will likely be the least stretched of the three nations, however they will still face shortfalls at a rate that must be addressed to prevent unemployment. Germany’s overall shortfall of talent indicates they will face similar problems – occupations in industries such as production, for example, are expected to rise, which is a good indicator of a shift from repetitive tasks to those in programming and technology maintenance.

This shows the significant need for reskilling and upskilling to meet the demands of these jobs, and it is why five of the six potential scenarios in Germany predict a talent shortfall. The same can be said of Australia and the US, with the US showing a projected shortfall of up to 12.5 million people.

A dearth of talent in computer and mathematics is projected for Australia, with a possible 330,000 jobs in the sector left unfilled by 2030. This is in comparison to Germany and the US who will face shortfalls of 1.1 million and 6.1 million in the industry respectively, showing the need for investment in computer-related skills training.

The job group with the next most significant projected shortfall varies for each. In the US, the deficit in supply of architecture and engineering workers is set to rise to 1.3 million in 2030. In Germany, the next most affected jobs are educational instruction and library occupations with a shortfall of 346,000, whilst in Australia healthcare practitioners and technical support look set to be in short supply.

As mentioned, with technology taking over mundane, repetitive tasks, Australia look set to see a large surplus in office and administrative workers, with 180,000 in the industry possibly seeking work by 2030.

Comparisons across the countries

The full findings of this report reveal some stark truths for each of the three nations studied – the key takeaway, regardless of individual data and needs, is that deliberate action must be taken to ensure that their workforces are built for the future. Despite each facing the issue in their own capacity with individual challenges, the US, Germany and Australia share a number of broad issues collectively that the report highlights. The need for a labour force with a specific composition of skills to meet the demands of the digital age is apparent across each country – this will require significant upskilling and reskilling processes. Projections show that a certain level of structural unemployment is inevitable for all three countries based on current projections, with a net workforce gap presenting a significant challenge.

Our joint research also reveals that automation will reduce numbers of both unskilled jobs and white-collar positions. The ability of technology to fulfil mundane and repetitive tasks in administrative, legal, accounting and other similar professions gives employees opportunities to expand into more strategic roles. On the other hand, roles that require human traits such as compassion and interactions – in fields such as healthcare or social services – will see a rise in demand for human skills to fulfil these roles.

These shared insights reinforce the fact that a concerted and deliberate transition is needed within the economies of the three nations studied.

The predictions laid out in the report provide a stark insight into the challenges the US, Germany and Australia are likely to face in the future, but they also paint a picture of what the experience is likely to be for many other nations around the world. Preparation, as always, is key to ensuring these challenges don’t turn into crises. Governments and corporate leaders should take these findings as a call to action to start building a workforce that is ready for the future. Understanding the specific demographic challenges laid out in this report and analysing where technology will have the biggest impact on the workforce provides a great starting point for such action. Building a workforce with the skills to adapt to an ever-changing landscape is vital to preventing mass unemployment and skills shortages. Technology is a constantly evolving facet of work, and the demand for different skills will always change, so investing in the workforce now and preparing them for what’s to come is essential.

The decade after the pandemic

By Dr Michael Kollo, Chief Economist At the time of writing, the world is just beginning to...
Read More

By Dr Richard George, Chief Data Scientist Amongst other things, one of the lessons taught by...
Read More

Always remember that the future of work is happening now