Is there a light at the end of the tunnel when it comes to planning for the Future of Work?

"Future of Work, reskilling, upskilling, hybrid roles." With over three billion searches on Google, the secret is out. A seismic shift of the workforce is coming and, in many ways, it is already here. Over the next 15 years, automation and augmentation are going to transform the demands on the United States' workforce, and whilst all states and industries will be impacted, they'll be affected in unique ways.

Knowing something is going to happen is one thing but knowing how to prepare and what action to take is another thing entirely.  With so many incredibly divergent views and reports on the future of work, how are we supposed to not only understand it, but also plan for it?

·       What can I do to ensure we are prepared for future of work scenarios?

We have so many questions, few answers, and in some cases, if we’re honest, we don’t even know the right questions to ask!

To create the plan, you will require actionable, forward-looking analytics that indicate which jobs need re-skilling (automation) versus up-skilling (augmentation), and the exact skill pathways to guide employees to the next opportunity.

The Power of Knowledge

First things first, before you can map a path for the future, you need to understand where you’re starting from.  Taking a macro view for Faethm’s US data, let’s focus on Maryland and Indiana.  On the surface, both states have a lot in common with roughly equal number of FTEs (Full Time Employees), and large segments of the population in Healthcare and Construction. Most starkly, upwards of 60% of their populations could experience change due to the adoption of emerging technologies.   That does not necessarily mean 60% of all FTEs will be replaced by AI but it’s a startling stat none the less.  At first glance, you’d think both states face the same grim future and should deploy similar strategies; but let’s dig a little deeper. 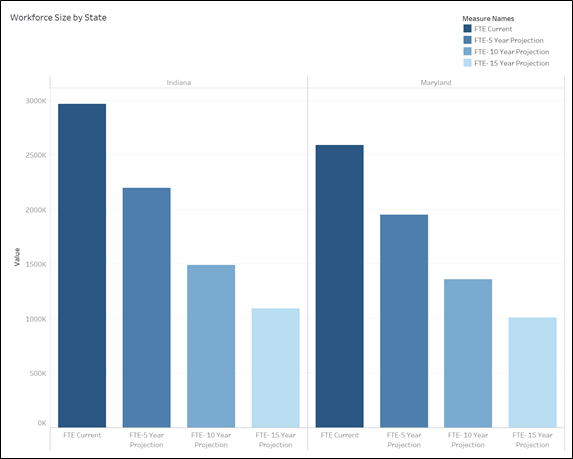 Putting a different lens on the Faethm insights, we start to see important differences. Indiana has more than 15% of its workforce in Manufacturing, their largest industry by employment.  However, Maryland’s workforce is more evenly distributed across several industries with two key industries – Professional Scientific and Technical Services, and Executive and Government Support – having nearly double the FTE of Indiana.  While workers in these industries are still at risk, given their current jobs, Maryland’s workforce possesses “future capabilities” allowing them to upskill or reskill quicker and easier than Indiana’s Manufacturing workers…more on that in a future blog! 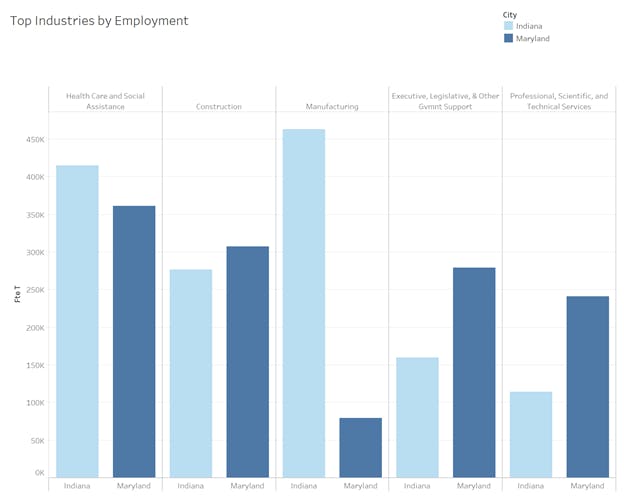 So what have we discovered by digging into the data? While the diagnosis for both Maryland and Indiana are similar, and require a call to action - 60%+ FTE potentially vulnerable - the prognosis, and as a result the intervention for each state is quite different. Business and governments in both states can arrive at positive outcomes for their workforce, but only if they are looking at accurate, actionable data!

Yes, the Future of Work is here, but that does not mean the future with AI is bleak. By understanding the path ahead, we can focus on a renewable and not replaceable workforce.

How would your business measure up? Would it be more like Indiana or Maryland... or maybe neither!

Diversity and the age of automation

Want skills that are immune to automation? Add 'power skills' to your workforce

The question on nearly every HR leader’s mind now is: ‘what skills will I need to add to my...
Read More

Emerging tech and the future of work

The future of work is changing and it's time to embrace the new world. The workforce, workplace and...
Read More